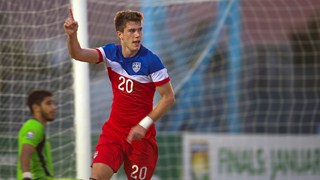 Former NM Rush player, Ben Spencer Jr. scored the game winning goal in a 2-0 win over El Savador at the recent U20 CONCACAF World Cup qualifying tournament. USMNT U20 team needed a win vs. El Salvador to qualify for the U20 World Cup and in the 37 minute Ben nodded home the gamewinning goal. The FIFA U20 World Cup will be held in New Zealand the end of May.  Spencer played his U13-U16 club soccer for NM Rush 95B leading the team to 3 NMYSA State Championships and 3 USYS Regional Quater-finals.  The staff at NM Rush would like to congratulate Ben, coach Tab Ramos, and the USMNT U20 on a great tournament!